Mine water and the Industrial Revolution

Many reasons are given for the rapid industrial revolution that started in Great Britain. Be it the textile machines that transformed the world of commerce out of Liverpool, or the need for faster and more efficient transport connecting the English cities. While all these are very easy to illustrate, here a spinning jenny and there George Stevenson’s steam locomotive, the actual trigger for all of this was actually something else – it was the eternal struggle on how to manage water in underground mines. Since ancient times, and yet again I refer to Agricola, 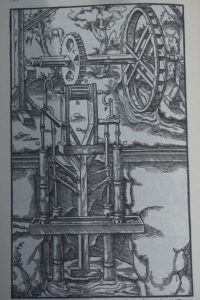 water was at the same time a curse and a blessing for mining. On the one hand, groundwater was an obstruction to mine the very ore the miners were after – and after all, the deeper they dug, the more serious the problem became. One the other hand surface water was a paramount for a successful operation. A stream nearby a mining operation allowed to run water mills that were employed to run water pumps to drain the mine workings or to run stamp mills that broke the ore. However the capacity for both ultimately depended on the surface water flow – the more there was, the more work could be done, the deeper the mine could get. However all this varied during year and over the years. To alleviate some of these annual fluctuations miners started to build dams and ditches, but seasonality they could not escape in the Northern hemisphere.

Also, when underground aquifers were dug into during the mining process, entire mines could be flooded and there was only very little the miners were able to do (mainly since pumping capacity could not be increased on a whim, nor maintained). For instance when the Goslar mine in the Hartz Mountains, Germany that started operation in 968 began to encounter increasingly severe water issues in the early 1200s it led to its closure in the mid 1300s. It took more than 100 years to reopen the mine. Mine water was no easy thing to deal with!

In terms of mine water management, nothing major changed technologically since then until the Industrial Revolution. So the coal mines in England that produced coal mainly for heating and cooking (not for transportation or steel making yet) faced the same water issues that hampered productions for hundreds if not thousands of years before them. The deeper they dug the more water they had to deal with. However there was one major difference. The enlightenment generated the interest in scientific explanations and resulted in the quantification of nature and natural processes. This allowed to imagine machines that never existed before and did man’s work. One of the pivotal moments came with Thomas Newcomen’s atmospheric engine in the 1712. 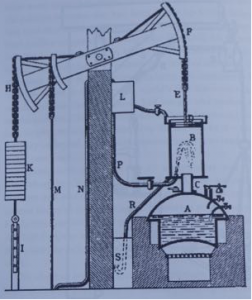 He explicitly developed it for the pumping of mine water out of Cornwall tin mines and then coal mines in Northern England, back than the biggest coal producer in Europe. He succeeded and his design became the de facto standard pumping machine in the mining industry in England. James Watt and other followed taking the principle further and making it more efficient and more compact, but the most important step was made – based on scientific knowledge nature became controllable, and mechanical work scalable. With this, the dependency on seasonal weather fluctuations was broken and output started to increase massively. This provided more and more cheaper coal that by now found its way to power other processes, be it steel mills making steel, firing steam powered railways linking up the English cities (btw, railways were also first employed in the English coal mines), or more machines and steam engines that powered textile mills across England. This in turn helped to reduce transportation costs and triggered the mass movement of labour into the cities that formed the new industrial society. All this increased the productivity of the England exponentially and made it the 1800’s superpower it was – all this because of Thomas Newcomen solved an age old problem on how to manage groundwater in deep coal mines. 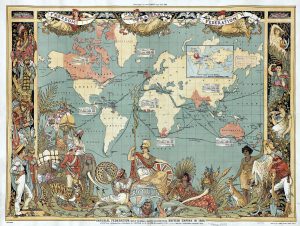 The British Empire in 1886 (wikipedia)

To get back to the water issues mines face today, though. In fact, nothing has changed in principle now compared to the past. It stays a nuisance underground and has to be drained. However, even to this day a mine could not operate without it either. It uses copious amounts of it for its ore processing or coal washing. The difference to the days before the Industrial Revolution is that we now have the pumping technology and scalability in place to deal with volumes of waters that our forefathers could not have imagined*.

*And if pumping does not help, we freeze it in place such as in Cameco’s uranium mines in the Athabasca basin.

p.s. one of the best accounts I ever read on the unfolding of the Industrial Revolution is given by Robert C. Allen. It looks at the economics and technological changes that made it happen in England. It is part of my permanent mobile library collection!