Copper mine productivity from Renaissance to now

Mining productivity has always been important. I am sure that the Egyptians or Romans were thinking about it as much as we do these days. However, since numerical data processing came into existence only recently, they never had the opportunity to have a long term view on it. This has clearly changed, even if data on Roman or Egyptian mines is probably too far fetched to ask for. So lets concentrate on times were there is a little more evidence, such as the last 500 years.

Before we do so though, lets first define mining productivity as how many pounds of copper were produced per miner and year. This ratio requires of course two inputs, data for annual production for a mine or district on the one hand, and employment data of miners on the other. Data on production exists more or less since kings and queens always wanted to know how much taxes they are owed. However, information on how many miners worked the mines is more incidental, and also hampered with more uncertainty. One has to rely on a lot of anecdotal evidence and generalizations; especially the further back one goes. However, there is a body of research that can be drawn on. Nowadays the data is slightly more accessible, but it is difficult at times to separate pure employees from contractors. If I had the chance I used the former. In addition, lets assume that the most productive mines throughout history were also the most efficient. After all, only when one can produce lots of metal at a low price, can one push out higher cost competitors and dominate the market. This is especially the case when looking at the metal markets some hundred years ago, when they were relatively small compared to nowadays. Finally, lets make sure it is understood that this little story is not an all-explaining one. It is rather a little scratch on the surface and is very much a work in progress.

With all this in mind, lets look what picture emerges since the year 1520. Productivities were pretty low then, so lets use the log scale, first. 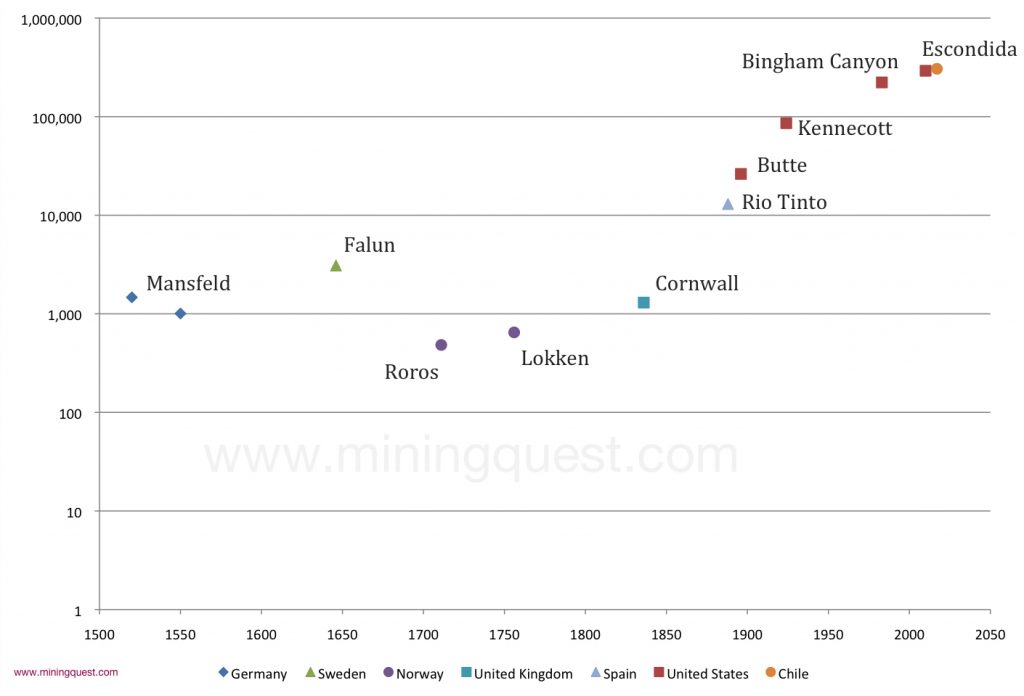 The chart starts during the height of the Renaissance. It was a time that probably saw some of the most significant innovations since the collapse of the Roman Empire. The rediscovery of classic Greek and Arab writings brought a lot of technical knowledge to Europe, especially that of water wheels. Their adoption for water pumping, hoisting and ore crushing helped to transform mining in Central Europe immensely. One example of an important copper mining center back then was the Mansfeld district in Germany, where thin seems of Kupferschiefer (copper slate) were mined. Production rates during the 1500s were little over 1000 lb per miner and year, and were falling as time progressed and deeper ore was developed. 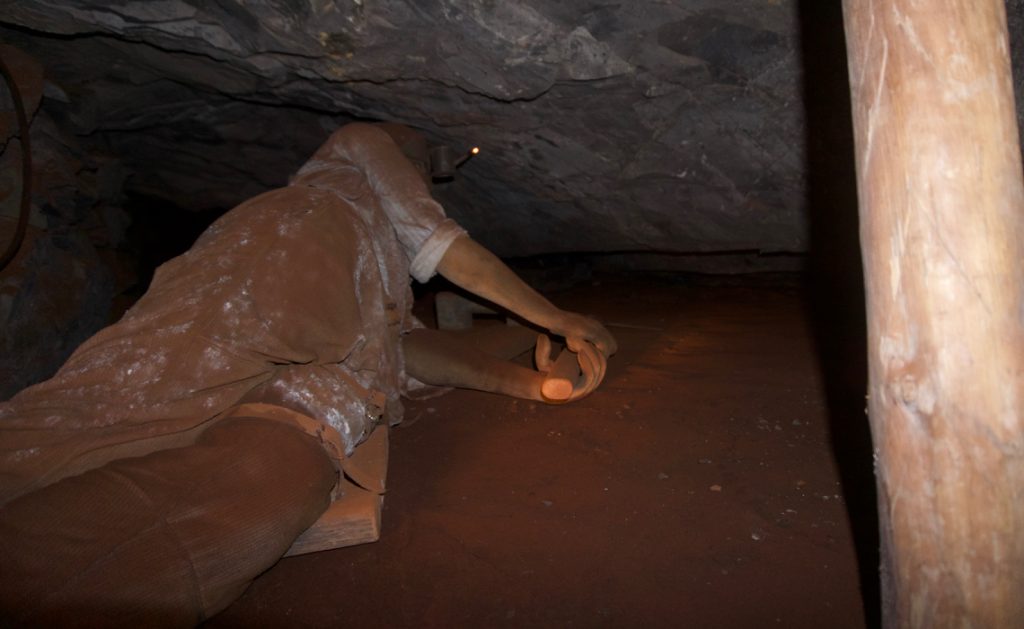 German mining knowledge was instrumental in the development of the next major copper deposit at Falun, Sweden. The mines were thrice as productive as the ones in Germany, and so it was just a matter of time that they became the dominant copper suppliers in Europe. The gathered riches fueled Swedens territorial expansion during much of the 17th century. At some point Sweden had so much copper that it even became a store of wealth and currency. 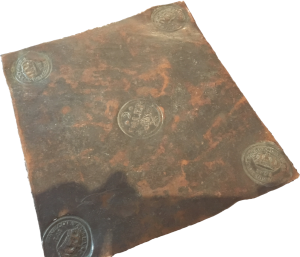 two Swedish riksdaler made of copper

The mid 1600s also saw a major innovation with the testing of gunpowder as a blasting agent. However, even while it improved productivity in rock breaking, the adoption of it was slow. After all, it was dangerous to handle and the explosive residues did not help the air quality in the poorly vented mine workings. In any case, knowledge of mining copper spread further north to Norway around Trondheim (Lokken and Roros), which became an important copper mining province. Productivities however did not come close to the ones in Sweden, earlier. Nevertheless, Norway’s copper was of higher quality than Sweden’s and commanded higher prices in the ports of Europe.

With the advent of the industrial revolution, Great Britain was at the forefront of innovation. The invention of the steam engine was essential to be able to reach previously inaccessible ore sections by draining deeper mine levels. The copper (and tin) deposits in Cornwall benefited from this game changing invention very much. Subsequently the region became an important European source for copper.

However, copper was still mainly mined in vein deposits that required lots of labor. After all, even with steam engines, productivity growth without versatile mobile mechanization, was very difficult to achieve in underground settings. Miners still followed veins to extract the ore, and the most powerful mobile entity down below was still the horse. Steam engines were simply too bulky and heavy to help the miner extracting the ore itself. 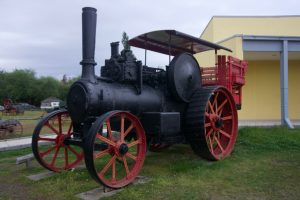 mobile steam engines were bulky and not suitable for underground mining

The solution to that was to move above ground and start mining deposits in open pit mines. The stars were aligned when in the late 1800s innovations such as dynamite, rock drills, and the first steam shovels came together. This all combined with the maturing rail technology allowed to mine ore deposits that were deemed exhausted or too low grade, before. One of these mines was the British development Minera Rio Tinto in southern Spain. The company re-developed the old mine workings that the Romans and even Phoenicians worked before. The productivity gains were impressive. The copper produced per miner jumped by a factor of 10 compared to the mines in Cornwall some 50 years before. This mine was so successful that it laid the foundation for one of the biggest mining enterprise ever since, bearing the same name Rio Tinto.

However, it was for the Americans to take over the torch of innovation and push mine productivity to new levels. The ingenuity of the young nation did not know any bounds. Inventions such as steam shovels, electricity, rock drills, froth floatation, cheap explosives (Anfo), solvent extraction, heap leaching and larger mining trucks, all hailed from this still very young nation. It transformed mining in various ways, but the ultimate result was always an increase in mine productivity. 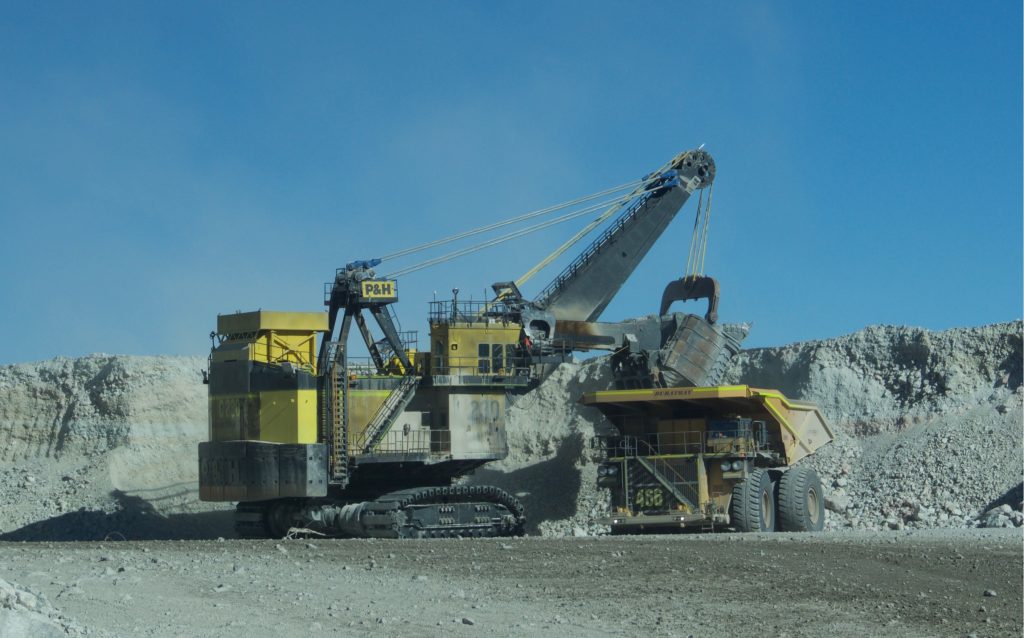 The results started to show, when mining of the “Richest Hill on Earth” began in Butte, Montana. During its heydays, the mine was already twice as productive as Rio Tinto in Spain. While Butte was running at capacity, some straddlers of the Klondike Gold Rush discovered the rich Kennecott deposit. Its development entailed lots of innovation, such as electric power and energy recuperation, as well as the use of ammonia leach, roller mills and flotation circuits. The development of the massive Bingham Canyon mine was the next major step. It more than doubled productivity once again and stayed the most productive mine for much of the 20th century. However, even Bingham Canyon is past its prime now, with Escondida wearing the crown of highest productivity. In 2017 it produced more than 300,000 lb (almost 140 tonnes) per miner.

Switching the chart back to normal scale, a striking observation can be made. Productivity growth has been linear since the days of the Rio Tinto mine. In fact the trajectory gives me quite a funny feeling, and reminds me of such relationships as Moore’s Law for the number of transistors used in CPUs (which predicts an exponential not linear relationship, though). 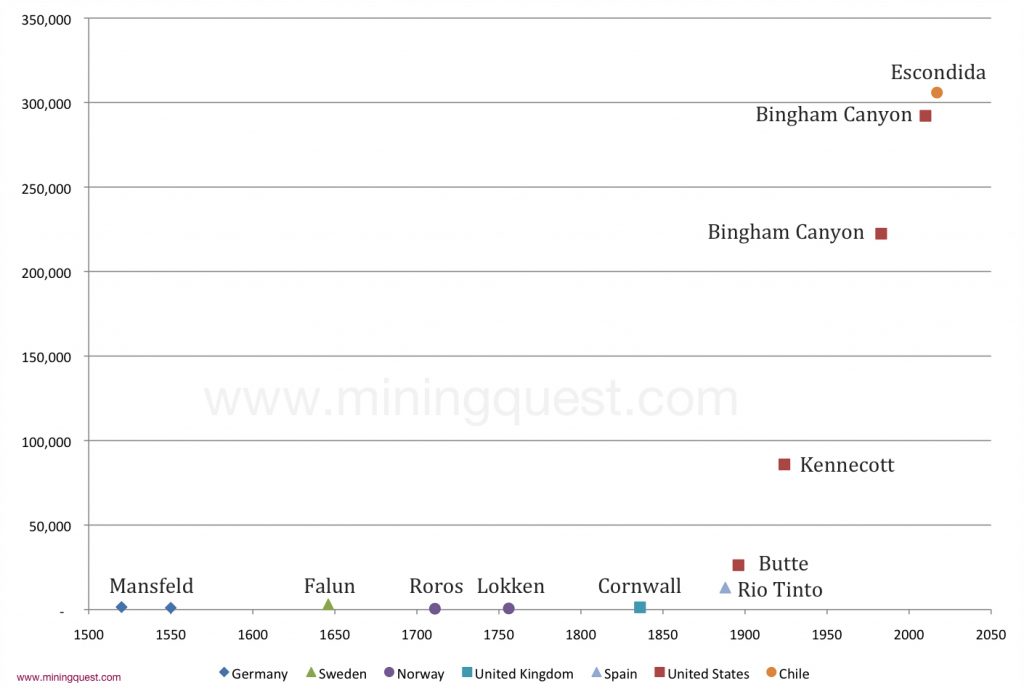 From a little under 13,000 lb per miner at Rio Tinto in 1888 to more than 305,000 lb per miner at Escondida as of 2017 – it is a constant and impressive upward march. For the last 140 years, the productivity growth seems to be unabated with every miner able to add about 2300 lb per year. Again, this is only valid for the most efficient mines out there, but the continuity of this trend for almost one and a half centuries is truly mind-boggling. This is even more so the case when reminding ourselves of the ever-decreasing ore grades around the world. To stay on this path we need even more ore processing, ie. bigger mills and tailing dams on the one hand, but also more automation on the other, ie. autonomous trucks, shovels, processing and sorting, transportation. No matter how we look at it, the task copper miners face seems herculean. 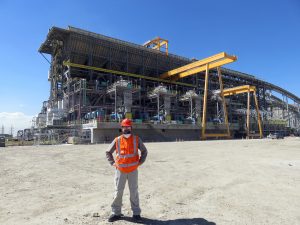 Cerro Verde’s crushing circuit is currently the biggest in the world. Its capacity sits at 360,000t/d ore.

In summary, for four centuries after the height of the Renaissance copper mine productivities were very low. They ranged between less than 500 to up to 3000 lb/miner and year. The rates however were more a function of the easy access to rich lodes of metal close to the surface and above the water table. It took the convergence of technical innovations at the end of the 1800s to substantially change the productivity trajectory in copper mining. Only then was the mining of ore bodies that were considered uneconomical even shortly before possible. Subsequently, productivity rates grew by magnitudes and and sit now at about 300,000 lb per miner and year. The seen linear relationship of productivity gains over time is impressive and it will need much more innovation to keep the growth that way for another 140 years. By then 600,000 lb per miner and year (~270 tonnes) could be produced by the most efficient mine. Stepping back for a moment, one can wonder on how the miner of the future will look like. Will it be a computer geek bringing home a huge copper nugget from outer space, all while staying at her mega yacht in downtown Vancouver?

How many lbs of copper will one miner produce in the future?