There is no doubt that flamingoes love the Salar de Atacama and salt flats elsewhere. These birds love them of course not for the high salinities of their brines or beautiful settings, but for the shrimps and algae that live in them. For eons, flamingoes come there to feed and breed, and will do so as long as salt flats are around.

We humans however like salt flats for other reasons, and it is definitely not for its tiny shrimps, nor the algae. Of course we love them for seeing the flamingoes, but more importantly we like them for the elements that are contained in the brines that make them. The brines on the surface are thereby not too much of interest, but rather those that are held in underground aquifers. So what are exactly brines? In general brines are formed when water from the surrounding mountains enter a restricted basin (ie. no exit) either on the surface or underground. Since the water enters a basin in a desert, the water slowly evaporates and the dissolved salts within it increase in concentration and hence form brines. While those brines get constantly replenished salts will ultimately crystallize and form salty sediments. Being next to volcanoes these sediments are interlaced with volcanic ash and windblown substances from farther away. This can go on for millions of years, and as in the case of the Salar de Atacama, sediments can reach thicknesses of up to 1200 meters.

Brines in underground aquifers can be pumped to the surface and minerals extracted. I had the chance to visit SQMs Salar de Atacama and was able to witness this fascinating process. There it is done by a little more than 800 wells that extract the brines from depths of 30 to 40 meters below surface. After a complex series of blending they are then put into evaporation ponds. In those the sun can do the heavy lifting and increase the mineral concentration even further by further evaporation of water, such that the minerals can be extracted sequentially and economically.

SQMs extraction process for its brines

So what is in the brines that makes them so interesting to us? The brines in places such as the Salar de Atacama contain lithium, boron, magnesium, potassium and sodium. Lithium of course is the metal everybody is talking about these days. You can find it in almost all lightweight mobile devices, be it in Iphones, laptops or increasingly cars (ie. Tesla’s giga-factory). 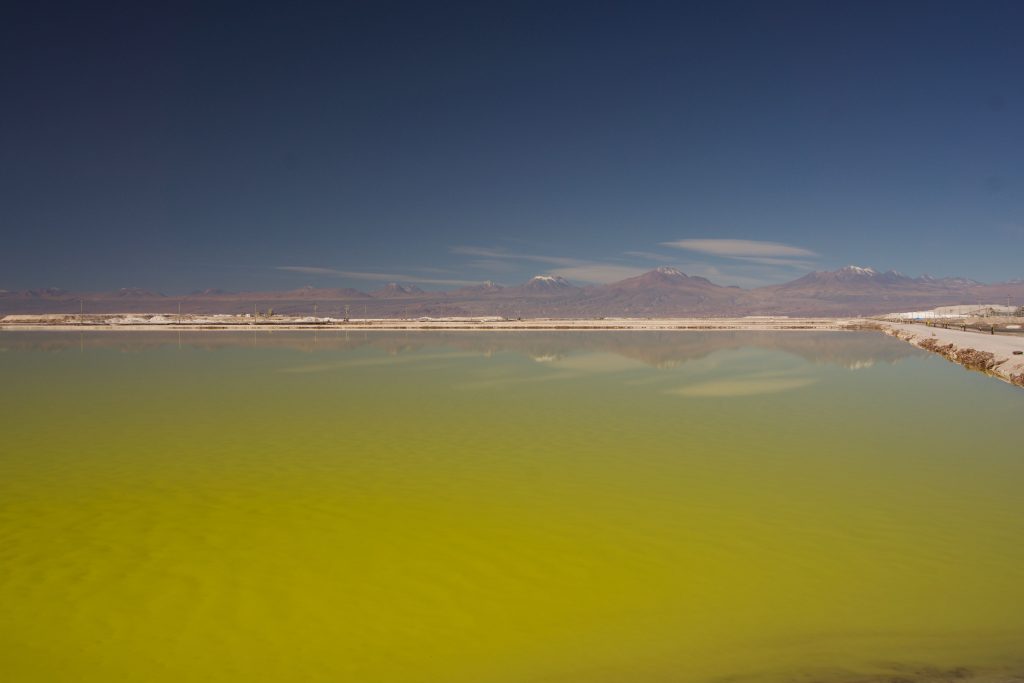 SQMs lithium brine pool – the brownish colour is from boron contained in the solution, not lithium

While lithium is the most profitable metal mined at SQMs Atacama facility, it is definitely not the product that is produced the most. This honour goes to potash, which is used mainly in agriculture – be it in the form of fertilizers or animal feed. Up to 2 million tonnes of it are produced annually vs the paltry 50 thousand tonnes of lithium. 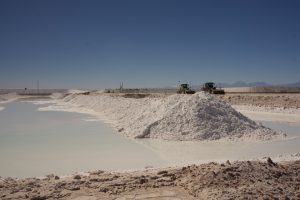 Looking at the other minerals contained in the brines one has to say that unfortunately none are really ending up in saleable end products, all due to economics. They are either being pushed back into the aquifers or put on huge stockpiles. For instance, the common table salt that is extracted first in the process, can not be sold profitably due to its high shipping costs to the port vs its low intrinsic value. Another example is bischofite, a magnesium mineral. In places such as Israel or the US the mineral is used to make magnesium metal, used for instance for engine blocks. However, producing magnesium metal from brines only works when you either have very cheap energy, a national interest where costs don’t matter, a nearby market or some sort of subsidy. Otherwise one just can’t compete with the Chinese that use the environmentally devastating (and therefore cheap) pidgeon process. So instead of ending up in a saleable product, the mineral at SQM rather forms Mount Bischofite from where visitors can overlook its operations. 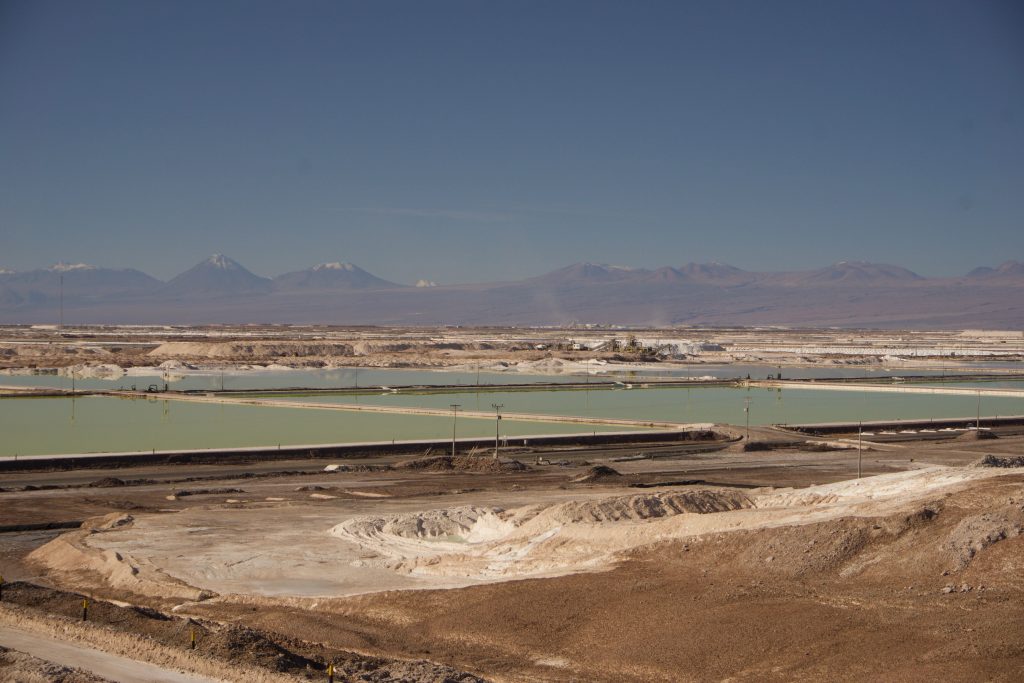 However, I think there is a solution to those stranded resources and thereby making SQM more profitable. What if I propose that the transportation costs to the port could be reduced to zero or even turn into revenue. It might sound like nuts but it is already done in other places. I think mainly of LKABs operation that ships iron ore from a pass altitude of 410 m in Sweden to the port of Narvik in Norway. The loaded trains there generate 5 times as much power going downhill to Narvik, than what they need to get back up empty. So the more you ship downhill, the more excess power you generate and the better the economics become. This should even be more so when considering that the Salar the Atacama sits at an impressive 2300m compared to the 410m in Sweden.

So if one not only ships the 2 Mt of potash, but also the two million odd tonnes of table salt, as well as the brines of lithium chloride for further processing, the economics should become ever more convincing. The amount of energy generated would then either be put into the national grid to generate extra revenues or would help in producing magnesium metal at the mine site. Two stranded resources would suddenly generate revenues and I am sure profits. What it would take is building a spur from the salt flat to the main line, electrify the existing railway, buy rolling stock for a couple millions and off you go. In times of low interest rates it should be pretty cheap to invest into capital projects such as that. An added benefit would also be that you can control the time when to ship the product to the port, and thereby one can ship it when power prices are highest during the day. Adding to peak power supply should even be in the interest of the Chilean government to better stabilize the national grid. Such a system also reduces the carbon footprint of the economy since less diesel and coal is required for trucking and power generation, respectively. I am convinced that other nearby mines would also be interested in joining this scheme, since they all have to ship heavy mine products downhill to the coast. Their participation would help in spreading the initial capital costs. I am just thinking of the million odd tonnes of copper that needs shipment at nearby Chuqicamata. 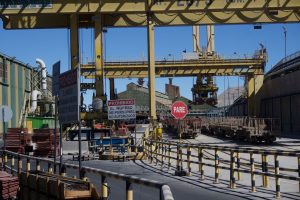 Looking back in history I actually would not be surprised that such a power recuperation system was already used before when the Guggenheims were developing Chuqicamata and Maria Elena. Their old downhill spurs in the area were all electrified and I know for a fact that they used electrical recuperation systems at their Kennecott operation in Alaska. There, all of its mines were driven by the recuperated electric power of their trolley system that brought the ore from the mines to the mill – and that was more than 100 years ago. I bet we can do as good or better today!

However, even if this sounds all gung ho, I have the feeling that many more Flamingos will visit the salars until such a system will be considered, just because so many interest groups are involved. Until such time, lets therefore enjoy the spectacular landscape and the wildlife of this corner of this world.