As you know, a couple weeks ago I visited the old Kennecott operation. While there and since then I was able collect a little bit more information on its operation. Over the last couple of days I extracted some I think interesting information I want to share.

When we talk of Apple and Google today as the mammoth technology companies it was in fact not very much different 100 years ago. Many new technologies were introduced and successful companies such as General Electric, US Steel or American Smelting and Refining Co. – ASARCO were at the forefront of it. As part o the ASARCO empire the Kennecott mine was no difference. For instance I was very much impressed to see an early version of a roller mill in the processing plant. This mill type was only reintroduced lately into the milling circuits around the world and reduces milling cost significantly. In general, the ore that was treated at the mill was extremely high grade (60-65%), so the mine mainly employed old fashioned gravity separation on a battery of shaking tables. However, to improve total recoveries ammonia leach (for low grade ore of 8%) and flotation circuits were introduced in 1916 and 1923, respectively. Especially the leach process was thereby ground breaking and in fact not proven yet on a commercial scale. However the risk taking paid off and it, in combination with the flotation circuit brought the total copper recovery up to 96% – a pretty good number for the time.

Technological advance however did not stop at the processing side. The company owned hospital featured one of the first X-Ray labs on the West coast, and people travelled far to get medical imagery done at Kennecott. 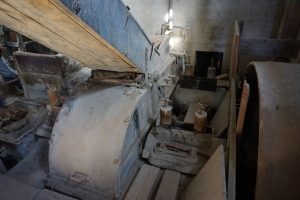 Roller Mill at Kennecott Mine

The most insightful documents, as ever, are the annual reports of Kennecott. I was only able to see one at the local museum but the data is a fascinating read. According to it the production cost was 8.29 cents/lb in 1923 and 8.23 cents/lb in the first half of 1924. Those costs include everything from production (3.14 c/lb & 3.39 c/lb, respectively) to transportation to NY, smelting and refining as well as selling and takes into account a significant silver credit of 0.69 c/lb (.50 c/lb). If you compare this with an average selling price of 14.7 and 13.1 c/lb, it makes for a fantastic profit margin (44% vs 37%), even in a not so stellar year as it was in 1923/4. When looking at the life time performance it is getting even better. Assuming that the costs changed little (which is a rather strong assumption) and that between 1911 and 1938 Kennecott was responsible for more than 88 % of Alaskan total copper production the numbers are getting mind numbing. With life time production cost of around USD 97.8 million and net profits of USD 98.3 million (dollars of the day), this makes a mouth watering average profit margin of around 50% for the entire life span of the mine!!! This of course made Kennecott one of the main pillars in the ASARCO empire and the Guggenheims and Morgans some of the richest families of the day. 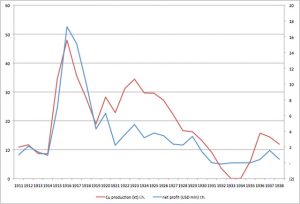 Profit and Production profile of Kennecott Mine

Interestingly enough, the Kennecott mine is ultimately very strongly linked to the Yukon Gold rush. If it would not have been for the latter there would not have been the many people that flooded the Yukon and Alaska region. When many of those realized that most of the claims at the Klondike were staked, a lot either returned or searched gold and other minerals in other places. The Kennecott deposit was ultimately discovered by two of them and everything else is history.

And yet there is another connection to the Yukon Gold Rush. It turned out that Michael J. Heney, the engineer that constructed the Yukon – White pass rail (connecting Skagway with Carcross) was also in charge of building the rail link from Kennecott to Cordova. While the Yukon pass rail is sill in place and is mainly used for tourists, not a lot is left of the rail leading to Kennecott. One of the remainders though is a steel bridge that is still being used as a one lane road into the National Park.