Boom and Bust .. an update

How time flies. It has already been six months since I posted my view on the boom and bust cyclicality in mining. At the end of it I predicted that the next mining boom will peak at the end of 2022 … but of course we are not there yet to judge if I was right. However, what we can assess is, if we already crossed into the area of general positive growth. As can be seen in the first figure, that is definitely the case. While the graph is still wiggling, the trajectory is clear – the industry is gathering speed. 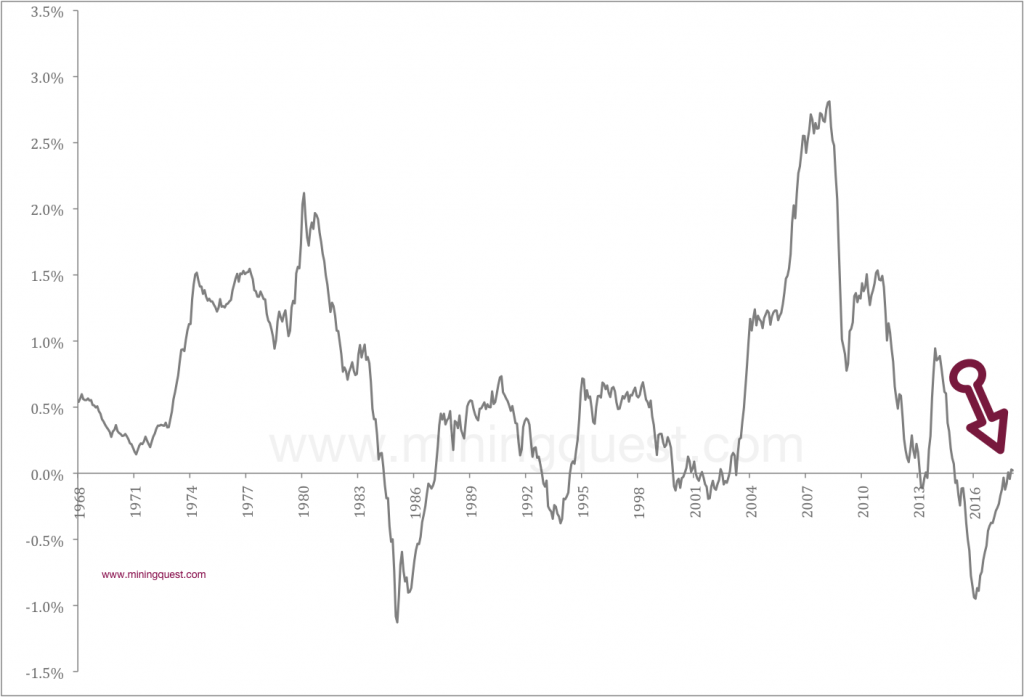 The mining industry is crawling back into the light

This is reflected in the mood of the industry which surely lightened up over the last half a year . So we seem to be on track for a full recovery of it. The overall picture is of course not a generalization for all metals considered. While cobalt, lead, zinc and palladium lead the pack, metals such as gold and nickel play a little catch up. Copper and molybdenum seem to have stalled for the moment, not to speak of metals still in the abyss – platinum, silver, and with uranium the worst performer. Their time will come, but it might take many more months to see an uptick. It means also of course, that the latter have the highest upside whenever they get rolling (this is no investment advice of course, just stating the obvious!).

Aside from the fact that the industry is currently on the verge of a new boom, I am currently more interested in how the length of the current bust we left behind compares with previous ones – and there are plenty of busts to chose from. I went for four major ones within the last 100 years. When I set the selected lengths of commodity busts next to each other (normalized at their respective starting month), one recognizes that we currently exit a bust roughly at the same time as the one in the eighties after about 36 months – ie. 3 years. The crisis in the 1980s thereby seems to have been more severe than the current one, and I believe the guys that remember this time can attest to that. The downturn was much sharper and companies closed shop faster. Unfortunately there are no old folks around to make a call on how the mother of all recessions felt – the mining bust that lasted from 1927 to 1935 (96 months – ie. 8 years) during the great depression. It seems to resemble a rather slow death with a fall into the abyss at the time we recover from it these days. I definitely did not want to be part of this one. Certainly if there is a bust, I prefer the one we just left behind us – or even better the one in the early nineties. However, as I already mentioned, I don’t really believe that this was technically a bust, but rather a supply shock that depressed metal prices due to the massive flooding of metals out of the collapsing remnants of the Soviet Union. 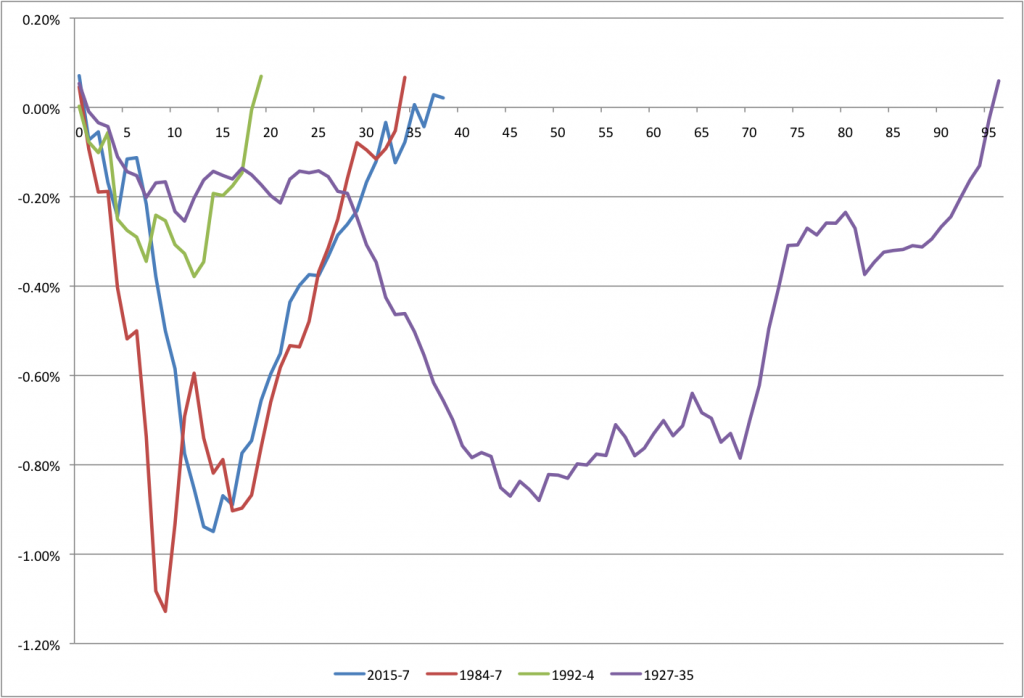 The length of mining busts in comparison (in months)

So, where does that this little analysis leave us? It shows that the bust behind us is not any different from anything else we experienced before. There is of course one implication of this statement. Most CEOs and industry professionals are not long enough around in their positions to assess hands-on where we are at in a cycle – they just experienced too few. Therefore every boom is new and will be declared something like a “supercycle” which fuels investor frenzy (which is good for everybody in the industry, because expertise is sought after and salaries go up), and everybody is loath to say that it might end .. ever. On the other hand, no CEO wants to tell their investors that the party is over and that the bust will last some 3 years .. such that they better take their investments and put it elsewhere. Other mining professionals just hope that the bust is over rather sooner than later, since all their livelihoods depend on it. Nations as opposed to the majority of people have the means to adjust for something like that. The rainy day fund that Norway put up out of oil proceeds is by now the biggest sovereign wealth fund in the world. They will tap it when the going goes rough. Mining nations can still learn quite a bit from that, but this a topic for a different blog.

Lets come back to mining, though. The current state is still ambiguous to some, but optimism is spreading. Booms and busts are the name of the game ever since the industry exists. It is like night and day. After every night there will be day. At times we just don’t know if the sun is still in the dark, peeking out of it, or if it is hiding behind a cloud or mountain. There will be day, eventually though!

A new beginning is dawning