I have always wanted to visit Potosi for its famed history and so I finally had the chance to do so. After all, this mine bankrolled the Spanish Empire for centuries. It financed the nearly constant wars the Spanish empire led in Europe and the Americas. It fuelled religious wars in Central Europe and prolonged the struggle for independence of the Netherlands. It helped to throw back the Turkish advances into Austria and broke the former’s naval dominance in the Eastern Mediterranean. However it also caused inflation simply for the fact that Potosi generated so much silver. At peak times during the 1600s up to 60% of all the silver in circulate coinage in Europe stemmed from the New World and most of it from Potosi. It also caused what we now call the “Dutch disease” to the Spanish economy. This happens when sectors such as agriculture decline while sectors such as the production of luxury items etc. boomed. It happened simply for the fact that agriculture could not compete in paying high enough wages compared to the likes of silver smithing. It also made the pirates of the Caribbean appear, which is nowadays a lucrative inspiration to Hollywood’s blockbuster movie industry. Moreover, it made silver so abundant that silverware actually became a household good item (well, for the nobles that was). So all in all, lots of reasons to make a visit! 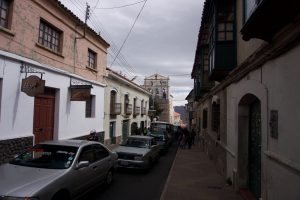 A narrow street in Potosi

When walking the streets of Potosi these days, it definitely feels like time has been frozen since the heydays in the 1600 and 1700s. At other places nothing seemed to have changed since the Spaniards laid claim to it in 1544. While the Incas were aware that there were riches in the aptly named Cerro Rico, a divine intervention of some sort told the Incas that this mountain was not to be mined by them, but by others. This intervention was according to stories a thunder that might have shown the displeasure of the Incas’ sun god when they investigated the mountain. Ever since this incidence the area is called Potosi, derived from the Inca language Potojsi – Thunder. The prophecy was fulfilled when the Spaniards conquered the area. This happened in 1644 when a local herder was looking for his Llama on Cerro Rico. 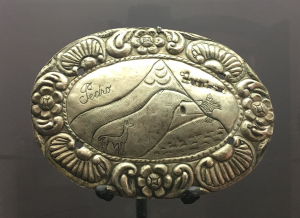 Yet another thunderbolt struck and melted some rock in his vicinity (maybe the silver as the best electrical conductor works as some sort of a natural lightning rod – the rod being the entire mountain). The melted rock turned out to be molten silver. After the discovery became known to the Spaniards a silver rush set in and mining started in 1545. Two years later some 3000 odd people lived there, swelling to some incredible 160,000 people in 1630. By then it was the biggest city in the Americas and most likely in the Spanish empire. While the population has shrunk since its heydays, it is still the second biggest city in the world above an altitude above 4000 meters. 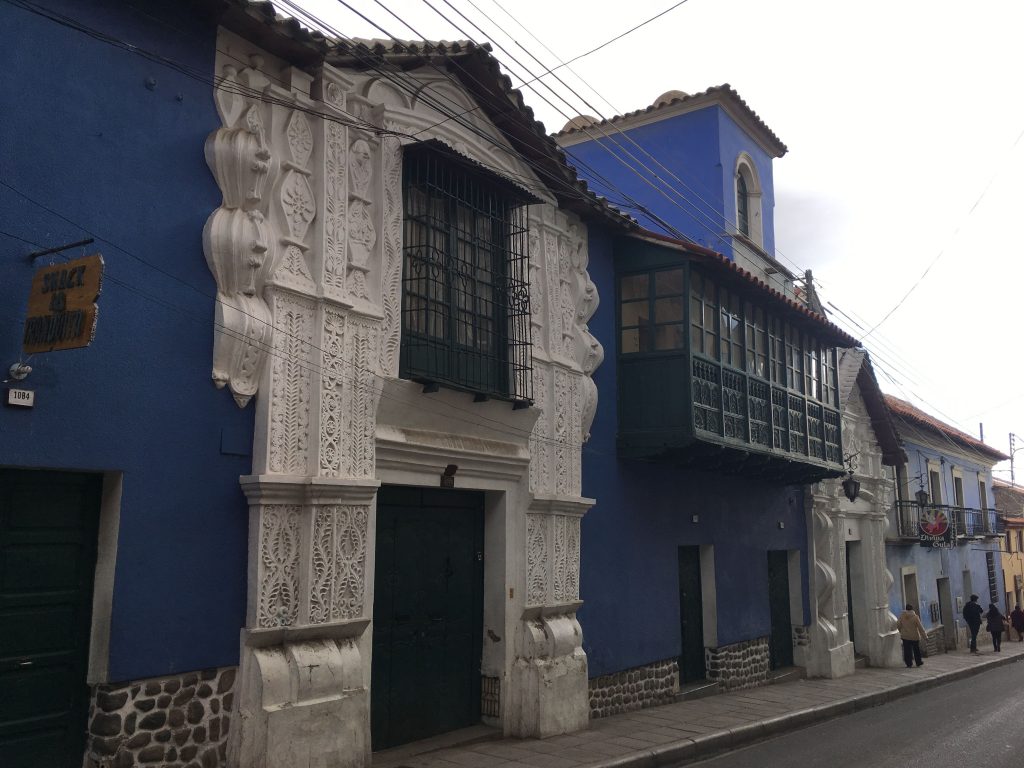 Potosi’s architecture is still impressive and reflects its rich past. One can easily imagine how back in the days the wealthy nobles looked down on the busy roads from their ornate balconies. The less so fortunate, and mostly natives and slaves from Africa were even lucky to see the sunlight. Most of them were tailoring in the dark, narrow mine workings. Many stayed for months without seeing daylight and many more died in those dark hallways. It is said, that some 8 million people were swallowed by Cerro Rico. Health and safety aspects did not matter back then since all that mattered was silver for the Spanish crown. 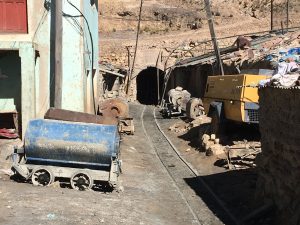 One of the many mine entrances into Cerro Potosi

When entering the mountain, it seems not much has changed since then. The wooden beams and pillars come out of a different century, and indeed the adit was started in 1750. Ore veins are mined like in a text book example of Georgius Agricola‘s De Re Metallica, maybe now combined with some dynamite. Two 19 year olds push in an ore cart on some badly maintained rails. The ore chute is opened by hand with a crow bar, and the ore rushes into the cart. The resulting dust makes everybody cough and since nobody really wears a mask, it is just a matter of time when silicosis develops. It will surely shorten the life of those kids to the average life expectancy of 40 years that is common in this mountain. Like hundreds of years ago the full ore cart is pushed out manually to the loading station where the ore is taken away to the mills. 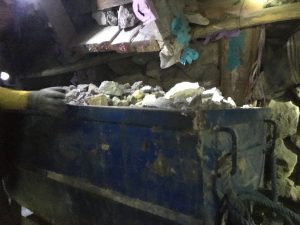 A mine cart is filled with ore

Back in the days those mills were nearby and so were the smelters. Nowadays the ore is turned into a concentrate and shipped out via railway to smelters around the world. Back in the days, the ore was processed using mercury to form amalgam, which then is heated such that the gold and silver was recovered. This unrefined material was then taken and refined and cast into bars. Much of this silver was then shipped at the bottom of huge galleons towards Seville, the Spanish entry port of the New Worlds riches. During this time the Pirates of the Caribbean emerged to hunt for those treasures carried by the Spanish fleets. However, the current impersonation Jack Sparrow by Johnny Depp makes them look more colorful and fantastic then they actually might have been. In any case, the silver that was not to be shipped in bulk, was either minted or turned into luxury items. For the minting process, the silver was first cast into small bars and processed in rolling mills to ultimately produce silver coins. Those coins were instrumental to run the economy in the New World. The set up of this process can still be seen at the local mint “Casa Nacional de Moneda”. It was set up next to the main square in Potosi, takes up an entire bloc and cost a fortune to build. There one can see probably some of the oldest rolling mills that still exists in the world, perfectly preserved. 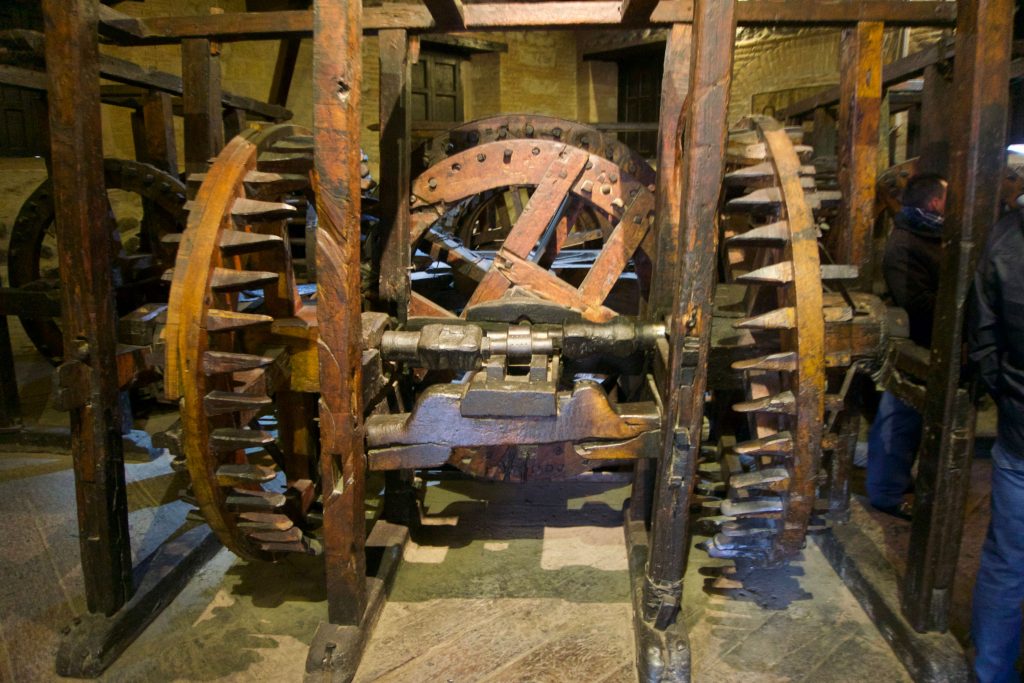 The mills that turned silver into wealth

These mills were originally designed in Austria (Spain and Austria were part of the same empire back then), built in Sevilla, shipped to Buenos Aires (sitting at Rio de la Plata.. another reference to Potosi’s importance in the hinterland) and carried on Llama backs up to Potosi. It is a reminder that even back then the mining industry and even the suppliers were part of a global network that is not much different than today. These mills operated from 1773 to 1869 when they were replaced by steam powered mills. These older mills however were powered by donkeys, four to each of the three wheels made of oak. 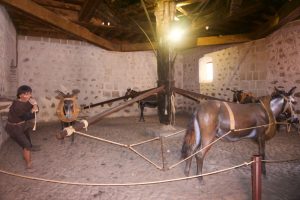 These massive wooden wheels in turn powered a total of 12 steel rolling cylinders. The cylinders flattened the silver bars into the correct width such that coins could be cut and stamped at a later stage. The principle of those rolling mills has not changed so much since then, be it in minting hot rolled coil, or cable production. It is definitely fun to see some early industrial evidence of this technology, bearing in mind how much it has evolved since then. 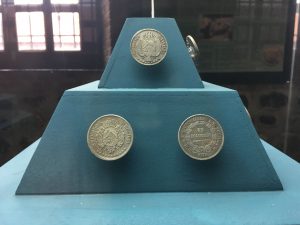 Silver coinage of the New World

To reflect on this visit I have to admit that a life long dream became true and that I was lucky to see it. The mountain is resembling a Swiss cheese and is slowly collapsing onto itself.. a couple of centimeters a year. Also, if this mountain would have been sitting not in quasi-socialist Bolivia but somewhere in a more capitalist place such as Chile, Cerro Rico might have turned into an open pit mine long time ago. The mining techniques currently employed, with labor laws and community ownership in place makes it difficult to spend capital on machinery. I bet capital could be spend to develop a much more efficient huge open pit mine such as Chuquicamata, with a safety record that far exceeds current practice. Hence somehow Bolivian socialism preserved this beautiful mountain and allows for a subsistence mining community that does not grow old.