I love ferry crossings. The gentle rolling of the ship calms down the atmosphere in the ship. It almost resembles a spa experience, especially if there are almost no passengers on board as on my latest trip to Dutch harbor. And while the sauna, hot baths and massages are missing on a ferry, the compensation is a plethora of opportunities to see whales, diving puffins and sea otters – all set in front of a magnificent background of the Aleutian islands.

So where does this trip along the beautiful island arc fit into the mining quest one wonders. It is of course related to geology. An island arc sits right atop a subduction zone where material is being melted deep down in the crust and forms huge hot magma bodies. Since hot material tends to rise so does the magma, and by doing so it cools yet again. This process lets minerals start to recrystallize but also let the pressure rise because of all the inherent water and gases in a magma. This in turn lets pressure rise within the magma chamber like in a pressure cooker and when it gets too high, they erupt to the surface where they vent and form those mighty volcanoes. In the process of all of this, metals can settle in the magma body and eventually form mineral deposits like those we mine today. Such mineral deposits might be low in grade, but due to the advent of big open pit mining process allow for the economic recovery of metals such as copper and gold. I think of copper mines like Grasberg, or Highland Valley as an example.

However, before anybody thinks of mining mighty Frosty Peak right now (or rather its underbelly a couple kilometers below), it will take a couple million years more before it becomes economic to do so – aside the fact that they are currently located in a national park. Long before that we might have made space mining economic.. at least one does hope so! 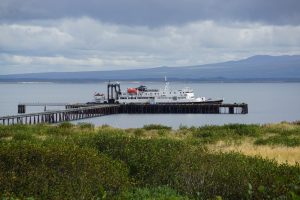